For three generations, professionalism has been what has separated Texas-based Sureguard Termite and Pest Services from its competition. To that end, Sureguard Vice President Brandon Houston had digitized all the paper-based processes in his business except one—the creation of pencil and paper diagrams.

Brandon knew that few pest management professionals have the skill to manually create clear, concise diagrams by hand, and he knew that this was an area where his company could stand out from the competition. He searched for a digital drawing solution for years, but all were either too difficult to use or couldn’t run on his team’s iPads.

Brandon discovered ArcSite by chance. His company was growing fast, and he was considering buying a competitor. It was during the due diligence process that he saw first-hand the drawings that a competitor had created using ArcSite.

He knew right away that this could change his business—not only by improving the professionalism of his team’s diagrams to help Sureguard win more business, but by improving communication between salespeople and technicians. Within 15 minutes of leaving that due diligence meeting, Brandon visited the Apple App Store, downloaded ArcSite to his iPad, and called the team at ArcSite.

After deploying ArcSite, the application has become a strategic advantage in winning large, commercial accounts at Sureguard. According to Brandon, “With ArcSite, our closure rate with higher end accounts, like million square foot Amazon warehouses, TD Industries, and big accounts with the State of Texas, well, we’ve closed every single one of them.”

“Our customers love the detail and professionalism in our proposals,” said Brandon. “We closed a $90,000 deal the other day, and I can say that it was 100% ArcSite. We were up against two other providers—one of them a large, publicly traded company. When our sales rep presented his proposal on his iPad, he was able to scroll through, zoom in and zoom out, and show certain things within ArcSite that he had created for each of the buildings. The purchasing director absolutely loved that. He said it was almost like he was looking at blueprints, and so they went with us.”

Brandon estimates that before ArcSite, his team won 60-65% of new accounts, but after deploying ArcSite his team his team’s closure rate jumped to 90%.

Sureguard’s new digital diagrams created with ArcSite are more professional than those the competition creates using the old pen and paper process. These new diagrams help them to stand out against the competition and win more deals. 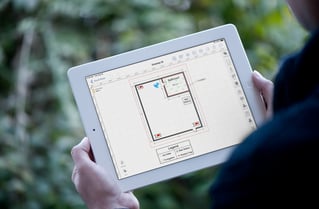 “Whether it's a homeowner or a big business, my customers' eyebrows are raised when they see the type of detail we create in ArcSite, said Brandon. “It looks to them like we've taken all this time to create these diagrams when in reality, it doesn't take that long. ArcSite has made it fast and easy, but it's not perceived that way. It's perceived that it took us a lot of time and we put a lot of effort in, and our customers really appreciate that. To me, that makes a huge difference.”

Brandon mentioned that, while residential customers aren’t necessarily as concerned about the level of detail in proposals as commercial customers are, they really appreciate the detail when it’s laid in front of them. With exclusion work, for example, his salespeople can diagram what areas are to be sealed up and add photos of areas like the roofs and crawlspaces where a homeowner won’t go.

According to Brandon, “We’re more detailed than some in our industry. When my salespeople are drawing the footprint of a house, I teach my guys to show the driveways, show the sidewalks, show the fences, where there’s grass and concrete, and if there’s a swimming pool, show that too. It makes a difference! One of my sales reps even had a customer email him back a few days after an exclusion job was completed asking him if there was any way he could get access to those diagrams so that he could modify them—the customer’s wife was so impressed that she wanted to plan out their backyard landscaping using Sureguard’s detailed drawings. The team laughed about it, but it goes to show how much customers appreciate those diagrams—they think it's the coolest thing in the world.”

“Our customers love the detail and professionalism in our proposals. We closed a $90,000 deal the other day, and I can say that it was 100% ArcSite.”

Like most states, the State of Texas has very stringent requirements about what must be in a pest diagram, from chemical usage, to the exact location of bait stations inside and outside of a building, to the square footage of a home. Brandon said, “You have to look at the way an attorney looks at it. The State is going to be looking for every single little flaw, especially when food processing is involved. If you show the side of a house is 29 feet and it’s 30, you’re done. They’re very strict. When I used to draw by hand a warehouse that’s, say, a million square feet, I used to have to do things like make sure I’ve indicated how big each large and small square is in a diagram, otherwise I’m in trouble. ArcSite took all that out. When a sales rep puts his finger down on the iPad, and he draws a line, all the while it's measuring for him. When he hits 30 and when he pulls his finger off, he’s done. We’ve been able to create these extremely detailed diagrams that show not only an icon for a rodent station or a fly light, we’re able to show the actual image of those, and there’s no gray area. ArcSite takes all that human error out.”

Most people in the pest management industry don’t have the 100% legible handwriting and keen attention to detail that Sureguard requires. Aside from portraying a less professional brand image, Brandon noted that illegible handwriting can cause confusion between salespeople and technicians, as well as between salespeople and customers.  When there’s confusion a relationship with a customer starts off on the wrong foot. With ArcSite, there’s always clarity. Salespeople can access an entire library of pest icons for their diagrams, add photos, and they can include detailed text to note things for a  technician like a customer’s allergy to a chemical and details like a contract clause specifying that work in a building must be done after 2:00 PM.

Brandon says, “We used to worry that things that were discussed with a customer or specified in a contract could get lost, but we don’t worry about that with ArcSite. Everything is clear. It’s right there—the customer sees it, the team in the office sees it, and the technician sees it. Everything we need is right there, and that’s great for everyone.”

If you are looking to use ArcSite to create professional pest control graphs and diagrams, download ArcSite in the Apple App Store or schedule a demo with an ArcSite expert for a customized walkthrough.

Site Plans: Efficient ways to draw, share, and save

How to Use Mobile CAD Drawings to Submit Site Plans

Businesses use ArcSite to submit digital drawings for permit approval. With the ability to quickly make changes, ArcSite saves you time and money.

ArcSite’s digital pest graphing allowed inspectors at E3 to digitally draw their graphs and upload them to the cloud for later updates.